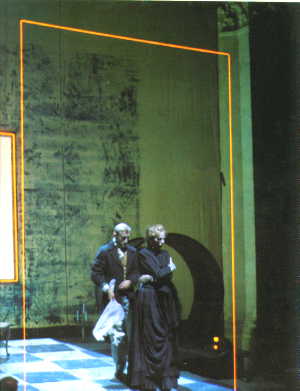 Taken from the works of the English writer Lewis Carroll and inspired by the works of Jorge Luis Borges, last September a play conceived by the classic singer and actress Marianne Pousseur has been staged at the Theatre des Bernardines in Marseille: « Dialogue entre l'huitre e l'autruche ».

The very peculiarity of this work is its hard identifiable genre: Marianne Pousseur's challenge is to find a connection between two apparently contrasting worlds: music and theater. As a matter of fact it is very difficult that in a show these genres fuse beyond classic schemes: in operas or musical comedies music always has the lion 's share. Theaters as well have a rather exterior and decorative relation with music, which is mainly utilized as sound-track or background music. In Carrol's world the songs have a very significative role: the texts, which are often eccentric are played by odd characters in the most unexpected moments. A further interesting aspect of Marianne Pousseur's work is the setting, i.e. the set decoration, a result of a precise artistic choice. « Through the Looking Glass », the novel by Carroll written after «Alice in Wonderland » begins with the young protagonist who is suddenly lured by the world « beyond the mirror », which only apparently is similar to ours.

Starting from this, « Dialogue entre l'huitre e l'autruche » imagines the existence of a sort of « box » beyond every mirror, a closed and parallel universe dwelled by people forced to precisely repeat each gesture and movement performed by the people and objects which are reflected in the mirror.

A very demanding task indeed, which requires a great deal of concentration and a huge number of different tools: a « good reflected image » cannot but possess all the objects owned by the character reflected in the mirror. 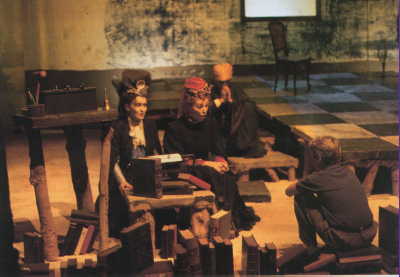 In Marianne Pousseur's play the imaginary universe of the world beyond the mirror is effectively represented by the setting made up of lights and set-decoration, The action is played behind an imaginary wall-back-cloth, in the middle of which a rectangular opening represents the back of the mirror. In the space showed to the public three reflected characters are playing, and it exactly represents the beyond-the-mirror world. On the side of the stage a big metallic wheel, opered by the characters, creates the energy necessary to the reflection process. The light help the public of perceive the different stages of the play through a diversification of mental spaces: in this way the visual representation of the reflection is essentially obtained. In order to reach such a result an imaginary and mental space had to be created, something that. without and word, could make the public understand they had entered a particular world, detached from reality, i.e. by the previous setting. Light had to act as its own representation, creating a conceptual, and not only visual universe. The ideal space produced by a mirror had to be created: a sort of perspective parallelepiped where the reflected characters could act and imitate the real movements. 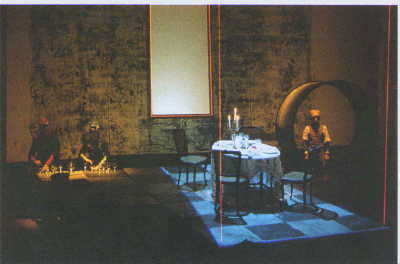 The problem was solved by drawing perspective lines, sketching out the reflection area and distinguishing it by means of different color-temperatures. This result could be achieved by means of a laser ray, but this did not allow to obtain broken light beams; furthermore the structure had the be simple and able to be hidden after having produced the reflection effect. these difficulties have been solved thanks to the utilization of nickel-cadmium wires which, when electrified, became incandescent and beamed a reddish light. The resistance necessary to have the wires get the max. luminance without reaching the melting point has been calculated according to the Ohm law; the metallic wires have been cut at the proper length and then installed with an elastic support so as to compensate the natural dilatation of the incandescent metal. This perspective structure has been supported by a strong profiled H.M.I. discharge light, able to reproduce the imaginary parallelepiped also on the ground. Starting from the alternation of the « reflection » light and of the other warmer lighting a visual sequence has been created, able to provide the public with the right path to follow the play.